Yes, you read it right, Zari is the most followed Ugandan Musician on Instagram. Though it really sounds unfamiliar to most people when the spunky mother of five children is called a musician, the fact is that she is [was] a musician with more than 5 songs to her name, some which include; Kangume, Oli wange, Jukila, Hotter than them, and many more. She has a following of 6.5 million and follows only 159 people.

He is undoubtedly the best musician of his regime and it is not a surprise at all that he has such a huge following of 704k and follows back only 59 people.

Leave alone the Rema-issue, the jubilation singer is such a big icon not only in Uganda but also in the whole of Africa and some other parts of the globe. He is actually formidable when it comes to international scene and as far as it stands now, there are no signs that any Ugandan musician can easily beat him. He has 694k followers and also follows 925 people.

Recently she has just finished and officially entered her new mansion. She is such a hard working and multi-talented lady. On instagram she has 571k followers and then follows 436.

Though rude and tough, her house-maid can assure you on this, the curvaceous and beautiful Nwagi is one of the most talented female artists of this generation. She has a following of 511k people and follows only 749. 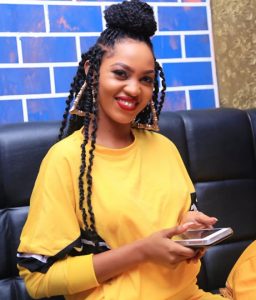 Madam 32 could not miss out on this long list. With a following of 490k people and following 419 puts her in the 6th position. Her top-notch talent and controversies presumably fetch her such a huge following.

The Swangz Avenue Alumnus is one of talents Ugandans will always talk of for all generations due to her saccharine music. She has 490k followers on instagram and follows 1,050.

Her vocals are really strong and worth to listen to in a song. Every time you listen to Rema’s sweet voice you don’t want to end – she is a super talent and it’s one of the reasons she has a big following on instagram. 489k people follow Rema on instagram and she also follows 265 people.

She is most famous for her stunning stage performance that few Ugandan musicians can portray. She has 472k followers and following only 3.

Despite her superb talent, she is really sexy and ever seductive which i dare say her bigger following are more of men. 436k people do follow Lydia and then she follows 461.

She is an irresistible veteran super-talented musician whom i believe has been an inspiration to almost every current female musician in Uganda. She has a following of 435k people and also follows 522.

Talking of the duos that have ever existed in Uganda, Radio and Weasel remains peerless. The self-proclaimed East Africa’s dynamic duo is not only considered the best to ever happen in Uganda but also among the best that Africa has ever got. Woefully one of the leader performers, Moses Radio, died and in aftermath the duo perished as Weasel decided to go solo. Radio and Weasel are followed by 373k people and they follow 921.

Celeb Bio: Who is Katrina Sangalyambogo?

Eddy Kenzo Finally Admits That He Is A Love Nigga

Number one source of Ugandan Entertainment News, Celebrity Gossip, Sports, Fashion and Lifestyle among others.
Contact us: kalemalawren@gmail.com

ABS TV Confirms the Passing on of Pastor Yiga