Over the weekend, social media surfaced with traditional marriage introduction ceremonial photos of celebrated NTV news anchor Flavia Tumusiime’s Kuhingira and Actress Hellen Lukoma’s Kukyala. However, since Flavia’s Kuhingira was expected, it was Hellen Lukoma who has reportedly juggled a number of city men over years that trended most as it came as a surprise.

Besides that, basing from the number of events that had happened to Hellen Lukoma’s personal life a few months before such as announcing her engagement to a mystery man in July by flaunting a ring alongside a brand new car on Instagram plus being gifted with a mansion on her birthday in September, it was not hard to believe that the ‘Addicted’ singer was off the shelf.

We all had the same conclusion, Lukoma was taken and this was taking a step further towards legalizing her romance. A number of fans and celebrities such as Rema Namakula, Lydia Jazmine, among others flocked social media to pour out their congratulatory messages to the former Obsessions and HB Toxic dancer.

What Could be the Truth?

However, as it turns out, there could be a twist in the plot given the message in her latest Instagram post is to go by.

“#movie Coming soon In cinemas. Blessed are those with eyes and can see. Wululu” Lukoma’s post on Instagram reads.

In simple interpretation, this wasn’t actually introducing her man to her parents, but rather a mock ceremony for a movie scene that will out in the cinemas soon.

Would this be another joke from the ‘Umbrella’ singer? Me and you… Just stay posted for more buzz regarding the development… 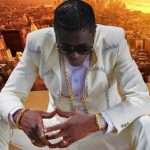