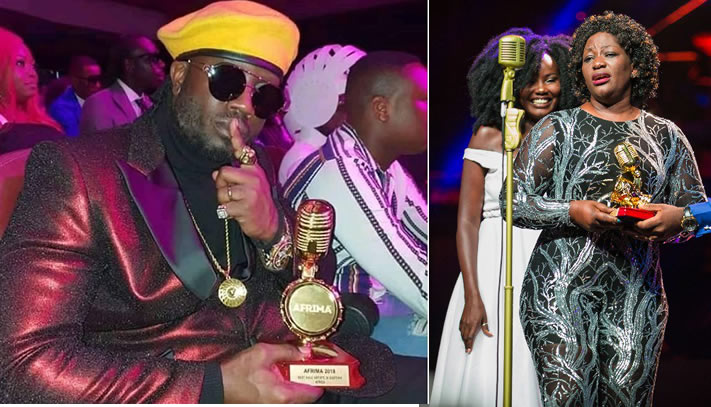 The weekend saw off the fifth edition of the All Africa Music Awards (AFRIMA) in Accra, Ghana with three of the nominated Ugandans from different categories flying Uganda’s flag high and higher.

Despite the earlier social media boycott of Ugandans not standing by Bebe Cool but rather vote for Tanzania’s Diamond Platinumz, the Gagamel boss went ahead to win the award for Best Male Artist in East Africa.

Bebe Cool who was only the Ugandan nominated in the category not only beat Tanzania’s bongo star Diamond Platnumz to the award but also other top musicians from the region including Harmonize, Nyanshiki, Rayvanny (Tanzania) among others giving him a reason to boast and brag.

“Just won an award for the best male Artist in East Africa at Afrima Awards 2018 Ghana. Thanks for the support my fans….. Most people misinterpret this process as arrogance, disrespect and/or pride. This process is comprised of hard work, honesty, belief and loyalty, which virtues must be cherished by those who want success,” Bebe Cool posted on his social media pages.

Bebe Cool was joined by other Ugandan artists on the list of winners on the night including Irene Namatovu who won the Best Artiste, Duo Or Group In African Traditional and Sandra Nankoma who won the Best Female Artiste East for her inspirational song ‘Kaddugala’. Media personality and NBS Katchap Presenter Anita Fabiola Kyarimpa was among the 6 people that hosted the red carpet at the awards event.

This year’s AFRIMA honored the best in music on the continent and the edition marked the first time it’s being held outside Nigeria. The award giving ceremony saw a number of outstanding performances from artists such as Wiyaala, DJ Switch, King wPromise and Stonebwoy, among others.